Here are some things you can expect in our next alpha release, on August 1st. That’s going to be Armed Forces Day in China. Yay, I guess?

First off, here’s the new shotgun by Stannum! The lucifer cannon will come in next release, most likely. The current shot is just a preview, the texture isn’t finished yet, but you can see the general appearance of it. He’s currently in the process of animating it too, and from what I’ve seen so far, it’s pretty neat! Much more shotgun-like than the old Tremulous shotgun. 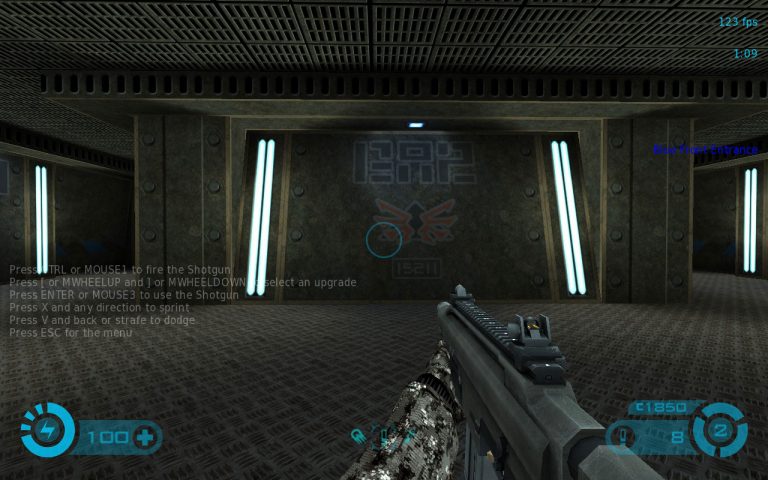 We have a new human HUD by Gireen! He’s done some truly great work on it, and it looks pretty neat. It’s certainly more stylish than the old human HUD from Tremulous. The stamina bar gives you a better idea of how much stamina you have left, and there are neat bars to show you how much ammunition you’ve got left. When he finishes the alien HUD, I’ll give you all a preview.

We’ll also have the new grenade effect by Stannum, as you’ve seen in one of my posts earlier this month. In addition, we’ll be bringing back the menu music used in our first alpha release, the song done by Vortexxian.

Code-wise, we’ve been working on optimizing the engine. A lot of effort has been put into cleaning up the code, and as you might have seen from the commit log, we’ve removed a lot of unneeded things we inherited. You should notice some performance increases client-side, especially on the new renderer. In addition, server owners will notice that our server program uses less memory than the old Tremulous one.

We also now have software gamma, so any changes to r_gamma will only affect the Unvanquished window, not anything beyond it. If you weren’t able to change gamma in Tremulous, you’ll be able to change it now.

OpenAL has been fixed. We’re using the ioquake3 implementation of it, meaning you won’t accidentally hear sounds across the map and sounds won’t cancel each other out.

A cool new feature we’re adding is URI scheme support, meaning that you’ll be able to click on unv://password@server links, and the game will load, taking you right to the server in question.