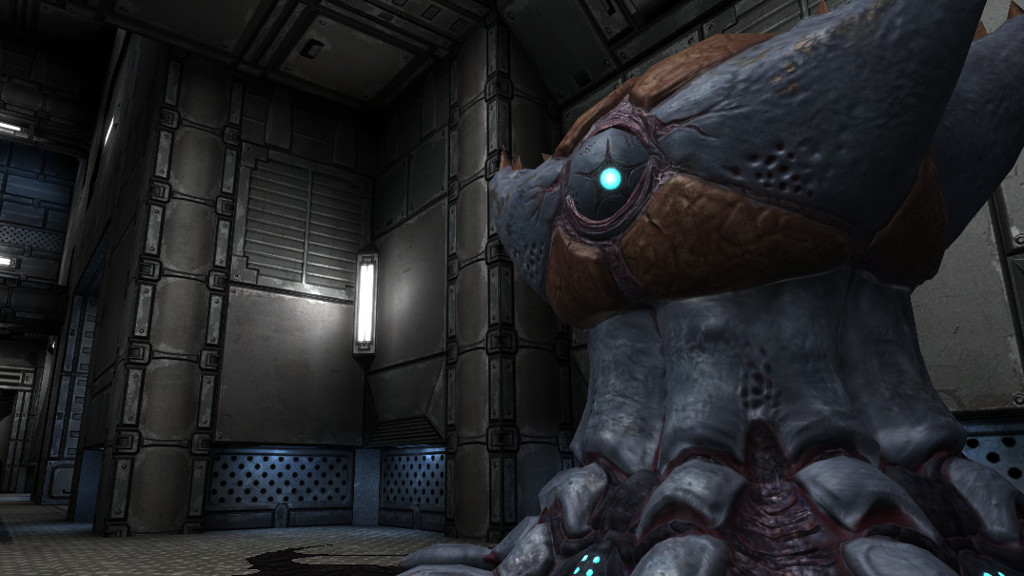 Unvanquished is a free, open-source FPS game with RTS elements, facing off technologically advanced humans against monstrous aliens. Players can choose either team, and must maintain a base while attempting to destroy enemy base structures. Humans rely on a broad variety of weapons and futuristic equipment, while aliens utilize claws, poisonous bites, and more (see our About page).

The game itself is under active development, bringing new artwork, gameplay, and engine features to the community. Pre-alpha began September 2011, and our first alpha release was March 2012. We have made dozens and dozens alpha releases since then, and we expect to reach beta soon.

Here are a few articles to give a sense of what we’ve been up to as a project:

Our project receives regular coverage on major sites like Phoronix and LinuxFr.org, where we have been praised for the quality of our artwork for an open source project.

The team behind Unvanquished is an international one, and developers range from experienced hobbyists to professionals contributing their free time, all of whom are centrally coordinated on our IRC channel and forums.

We are always looking to expand our team, and currently we would like to fill several positions to help bring us closer to beta next year. Although all positions are unpaid due to the non-commercial, open-source nature of the project, you will be fully credited for your work and it will be an excellent portfolio opportunity. The amount of time you can commit is up to you.

If you are interested, feel free to email our recruitment manager directly at apply@unvanquished.net with what you are interested in working on and a few examples of your work. Depending on the position, this can either be a personal website, a link to a coding profile, a formal portfolio, or simply a demo reel or a few image attachments.

We currently use some very old sounds effect from an old project we forked long time ago that was named Tremulous. Those sound effects have poor quality and we don’t trust Tremulous about their license so we need to replace almost all of them.

Some of our models may be already modeled and animated and are just waiting for someone to implement them in game. For example we need someone to implement the first-person grenade hand-throwing view in game and we have some other weapons waiting to be replaced with their brand new models. There is a lot of code you can read from what was done for other models to help yourself in that task.

Our engine was famous in the Open Source community for its modern features but time is passing and we have to keep up with what people expects from games today. We would like to have interesting stuff like sRGB lightmapping or realistic water effects for example. So we are looking for people who knows how to do magic with GPUs. In some case we would be able to redirect you to some known implementations you may adapt from other existing engines with compatible licenses.

Our games provides a virtual machine to run custom modifications. This virtual machine is currently based on Native Client (NaCl) but since Google deprecated it and since Webassembly (WASM) became the standard to replace it, we are looking for people helping us moving from NaCl to WASM. Note that the task is expected to be far more easier than the port from Quake Virtual Machine (QVM) we did before, so we know it’s not too-much for one skilled man.

We also done a lot of work to upgrade our engine from C to C++, and have made huge strides in updating our inherited Quake 3 codebase. There is still probably some refactoring and optimization work to be done here and there, and an assortment of other projects that can be given to new programmers interested in contributing to our engine development.

We presently have several player models that require animation, and further down there will be more, including some base structures. Models are provided in the OBJ format, and are exported to the IQM formats.

Our new UI system is based off libRocket, which allows us to utilize HTML/CSS for the in-game interface. Designers can easily create new interface elements, such as HUDs to be used by both teams, new menu designs, and other means of extending in-game functionality. You can create new assets, or work off our pre-existing ones.

Our game ships with an assortment of maps, and it would be desirable to provide a variety of environments for our players. Maps for our game are made with NetRadiant, and we ship seven pre-packaged, shared texture sets that can be used for your work, or you can produce your own textures.

We presently have concept art for multiple weapons that need to be modeled. It would be desirable if you could provide the assets for a firing effect as well, but this is not a requirement. We may also be able to offer hard surface props if you are interested in doing a human base structure or map objects.

There are several alien base structures that must be modeled, and we may also be able to offer alien player models. Base structures are stationary, but they will receive a range of animations. You can animate your model if you are familiar with animation, or our animators can do it for you.